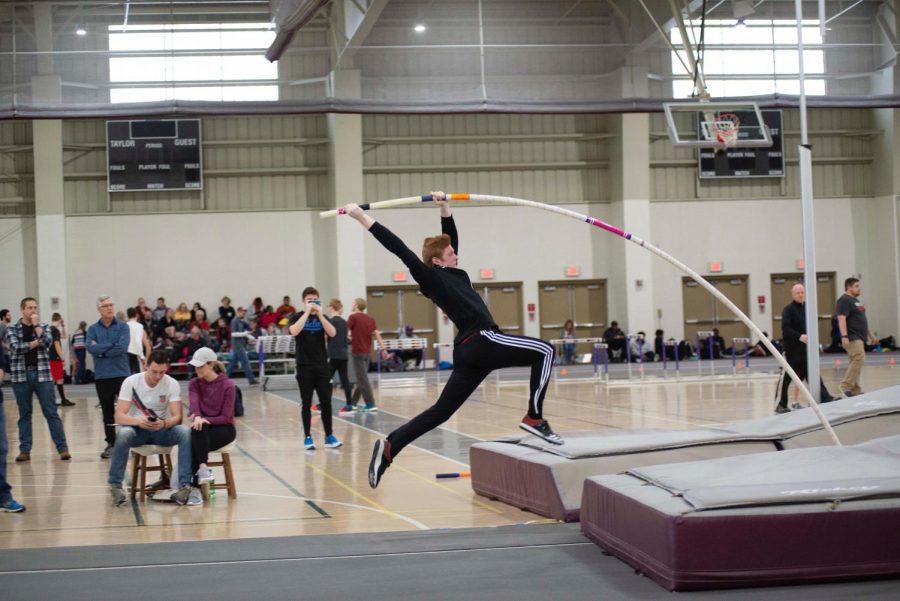 Everything else seemingly melts away as senior Nathan Stone stares down the obstacle ahead of him.The rush of adrenaline before launching into action is almost suffocating and the air is heavy with anticipation. He sprints down the runway, carrying his pole. The pole is then firmly planted directly in the center of the ground, causing him to fly over the top of the bar. For a minute, it seems as though he is soaring before landing on the mat. The contact from the mat brings back everything he had blocked out, including the roar of the crowd.

“Prior to vaulting, on the runway it’s a little nerve-wracking and kind of stressful in a way because you know that you’re going to have to buckle down and do it. But then it’s kind of freeing because I trust my training and my abilities. It makes you weightless so it kinda feels like everything else is weightless as well. It’s a good feeling,” Stone said.

Pole vaulting is a difficult sport. It can be taxing on a person’s body, and if done incorrectly, can lead to devastating injuries. Despite the risks, Stone continues to favor the sport. He practices for four hours nearly everyday, not including the workout sessions he attends to outside of the school. Although Stone loves the sport, he admitted that vaulting was not originally his choice.

“I didn’t even really choose it in the first place. My football coach told us we should all do track to get faster for football. I was thinking originally hurdles or something and he was like ‘you should try pole vaulting’. Within the first week, I fell in love with it,” Stone said.

Pole vaulters have to be confident when pole vaulting. In his years of vaulting, Stone has come to realise that confidence is the most important factor in pole vaulting. Without it, a vaulter may stall and potentially hurt him or herself.

“A lot of people aren’t confident, especially when you get on bigger and longer poles. People can get scared and then they’ll slow down. Them being scared causes them to get hurt or at least close to getting hurt,” Stone said.

Because of his hard work, he was able to vault 17’ 6”; therefore making him No.1 in the nation and beating the Lawrence North’s previous record. Stone admitted his aspirations of going to the Olympics.

“I like to say that I can go to the Olympics if I keep training as hard as I normally do,” Stone said.

Although pole vaulting is Stone’s favorite, he had previously played multiple other sports. During senior year alone, Stone had participated in soccer, club baseball and basketball while maintaining the status of being a distinguished honor roll student every semester. It was more strenuous when he was a freshman due to adjusting to the groove of high school. Now, he has been able to successfully balance his school and extracurriculars efficiently.

“It was a bit tough at first balancing everything, especially freshman year, but then I got in a groove and just get things done efficiently, I guess, andI get most of my school work done at school,” Stone said.

After looking past the grueling training schedule and the potential dangers of the sport, pole vaulting gives the participant feelings of flight, fear, excitement and joy. It is something Stone encourages others to join.

“It’s truly indescribable. You should just try it yourself,” Stone said.