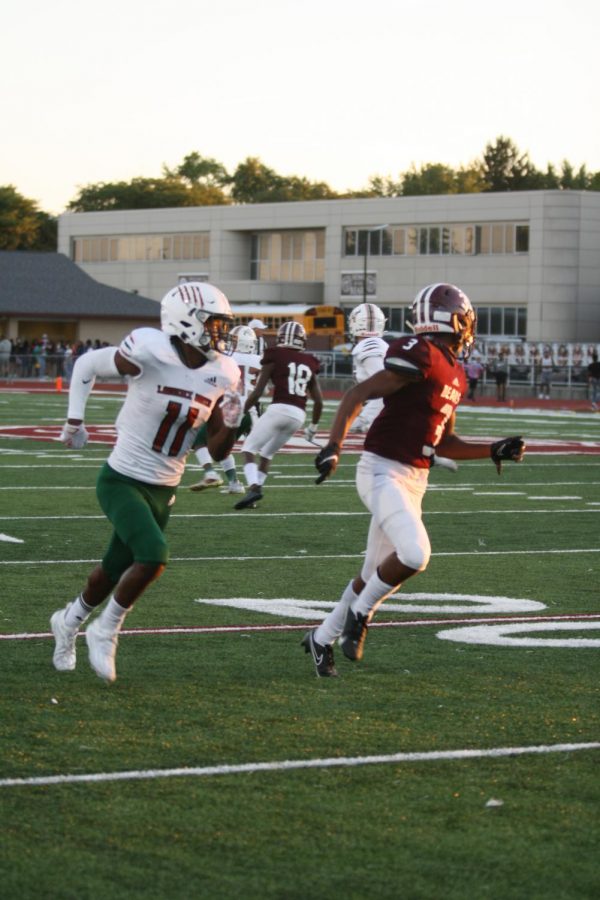 When junior Omar Cooper started playing football at LN, he rotated between quarterback and wide receiver.

Offensive Coordinator Edward Tucker saw that there needed to be a slight change in the offensive positions right before Cooper’s sophomore year. Would Cooper continue to be the backup to then junior quarterback Donaven McCulley, or would he be a wide receiver who would have to work his way up the varsity ranks?

Tucker decided on the latter.

“Our quarterback (Donaven McCulley) right now is really good, and we knew that Omar was way too athletic to not be on the field,” Tucker said. “It helps us because Omar being a former quarterback, he had to know everything, and now as a wide receiver, he just has to know his own part. That helps him as a receiver because he knows how open he needs to get.”

During the summer of 2019, starting quarterback Donaven McCulley kept his job, and Cooper moved to the wide receiver position. He trained and worked many hours just to make sure he had everything he needed down to make the season a good one.

While Cooper was adjusting, McCulley started to see the benefits of what Cooper was bringing to the team. He realized that Cooper was going to be something special.

“He was pretty much all for it, switching from quarterback to receiver because I was going to be the starting quarterback. It was crazy because as soon as we started summer practice, we just knew he was a star in the making,” McCulley said.

Through practices and even games, both McCulley and Tucker saw the potential Cooper brought to the field.  However, they didn’t know what level of production Cooper would provide to the Wildcat offense.

“Last year I knew it was his first season playing wide receiver and being coached as a full time wide receiver. We just expected him to be fast and athletic and be able to make plays. We knew he had the potential for a good season, but we didn’t foresee 1,200 yards receiving and the kind year he had,” Tucker said.

In his sophomore campaign, Cooper had 53 catches for 1024 yards, 21.6 yards per catch, and 13 touchdowns. One big thing Wildcat fans will remember is during the highly anticipated game on September 9, 2019, the LN vs. LC game at Lucas Oil Stadium, Cooper put on a show that came as a surprise to some people. But for Tucker and the team, it was what they knew he was capable of.

“Last year in Lucas Oil was the first time that everyone else was on the Omar bandwagon, he had like four touchdowns. What really stepped out to me was summer practices because he was doing one handed catches. No one on our team was  surprised at Lucas Oil because of what he had done in practices. In practices, I would look over to our receiving coach and tell him, ‘Man, that kid is good,’” Tucker said.

Cooper continues to have success in his junior season. Many Division One schools have looked at him, including some offers from the Big 10 conference, like Indiana University and the University of Wisconsin.

He is not quick to take the spotlight though and instead shifts the spotlight to someone else. According to Cooper, there is one person who has helped him the most in his journey, from being McCulley’s backup, to becoming an even better wide receiver, that person being his Dad.

“I attribute my success to my Dad because he has helped a lot with practicing and what works and doesn’t work. He has always been there to help me out no matter what,” Cooper said.

With the support of his Dad and coaches around him, the transition from quarterback to wide receiver has been something that has definitely improved the Wildcat offense. You could say that Tucker’s decision has paid off and Cooper is now understanding when it comes to the transition.

“At first I was kind of mad because I didn’t want to switch since I played quarterback all my life. But then after I was seeing the success I had, I kind of enjoyed it and I’d rather prefer playing receiver instead of quarterback now,” Cooper said.