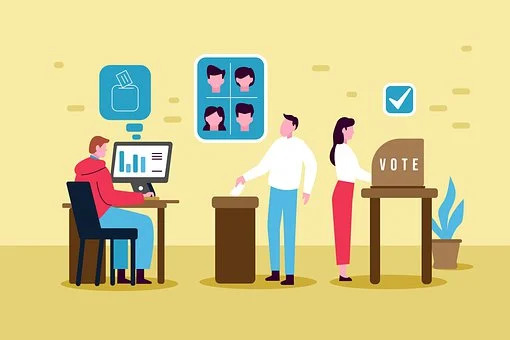 The 2020 election will take place tomorrow, Nov. 3. Many have considered this the most important election in recent times. Early voting and mail-in has already started. There have been record breaking numbers. According to CNN, 91.6 million ballots have already been cast. This election preview here to provide with a guide who are the national candidates and their position on major issues as well as what candidates you may see in the local Indiana election such as the governor and congressional district.

Running Mate: Kamala Harris- Former lawyer and California senator. If elected will become the first African American woman to be the Vice President.

Immigration: Reverse policies that separate children and parents at the US-Mexican border. Lift travel ban on Muslim countries. Support children protected under the Dream Act and expand federal student aid to them as well.

Pandemic: Hopes to develop a vaccine. Plans to withdraw from the World Health Organization. The past has granted a stimulus package to citizens,business,etc.

Jobs and Money: Predicts that the economy will bounce back from COVID-19. During his first term he has increased tax cuts on income and corporate. Has limited federal regulations on businesses.

Trade: Wants to end American reliance on China. Plans to offer tax credits to businesses to move companies out of China.

Immigration: Promises to continue construction on a wall between the US-Mexican border.Wants to eliminate immigration based on family ties through a new entry system.

Health: Plans to repeal Obamacare. Also, wants to reduce the costs of drugs. As well as giving federal funding to help the opioid crisis.

Climate Change: Since being  in office trump has limited environmental restrictions. He has reduced the amount of carbon dioxide emissions from power plants and vehicles. As of recently he has allowed oil drilling In Alaska.

Criminal Justice: Promises a Second Step Act which is a follow up to the First Step Act. Has given strong support to law enforcement especially during the protest relation to race relations.

Economy: Holcomb revealed a five-stage plan called “Back on Track” to help reopen the economy. Indiana transitioned into Stage 5 in late September. Which allowed most businesses to open back up. He also provided millions of federal stimulus dollars for businesses and the creation of the Indiana PPE Marketplace.He expanded with the use of CARES Act funding. The program offers residents with free job training for in-demand careers

Criminal Justice: The governor would begin Equipping police with body cameras instead of banning chokeholds.  with body cameras. Does not want to legalize or decriminalize marijuana because of federal law. Endorses Black lives Matter as well and acknowledges the history of racism.

Education:Created the Teacher Compensation Commission and asked them to come up with a  plan to raise teacher salaries AS well as dealing with reopening schools. Has worked with Dr. Kristina Box to come up with a plan to open schools and hopefully get them back to full time. To reopen no more than  100 cases per resident and a positivity rate below 10%. An enforced use of  distancing, hand hygiene,etc.But if a county is above both qualifications the state recommends looking at some degree of hybrid instruction.

Jobs and Economy: Myers said he would target residents who can not access the state’s job training program. He would offer mentorship programs and expand the state’s 21st Century Scholars program.

Crime: Myers would ban choke holds across the state, and look at reducing or ending ways that police officers restrict movement when interacting with people. Does not want to legalize marijuana,but decriminalize possession of marijuana. As well as allowing the usage of medical marijuana Endorses black lives matter and acknowledges the need for reform.

Race: Support peaceful protests in response to racial injustice. Implement mass incarnation and sentencing reform. Does not want to defund the police,however supports the use of body cameras. Also, passing laws such as no knock warrants etc.

Education: Supports all methods when it comes to returning to school during the pandemic. Extending financial aid and the use of trade and vocational schools.

Previous Political Background: Serves as a member of the Indiana Senate in the 20th district.

Pandemic: Practice social distancing and wearing a mask.  Use private sector companies for PPE and testing.

Race: As an immigrant she has experienced discrimination due to her race. Therefore, she supports diversity and inclusion. She stands by peaceful protest,but not looting. Does not want to defund the police, but wants to fund body cameras and additional training.

Education: Buildings should stay open if they can during the pandemic. Parents should have the option of sending their children to school or not. To address the debt crisis align the cost of education with potential salaries. Also, extend workforce opportunities.

Education: Extending youth mentorship programs by proposing two bills. The Transition to Success Modernization Act and the Students Helping Students Act. Also, expanding Pell grants and loans to students to help reduce student debt. He plans to introduce the Higher Education and Employment Transparency Act. This guarantees that students have access to that information, and supports  efforts to give students the resources to make choices.

Crime: Wants to continue work from the First Step Act in reforming our criminal justice system.  She thinks that the Second Step Act should include reentry programs and avenues of reducing unemployment of offenders.