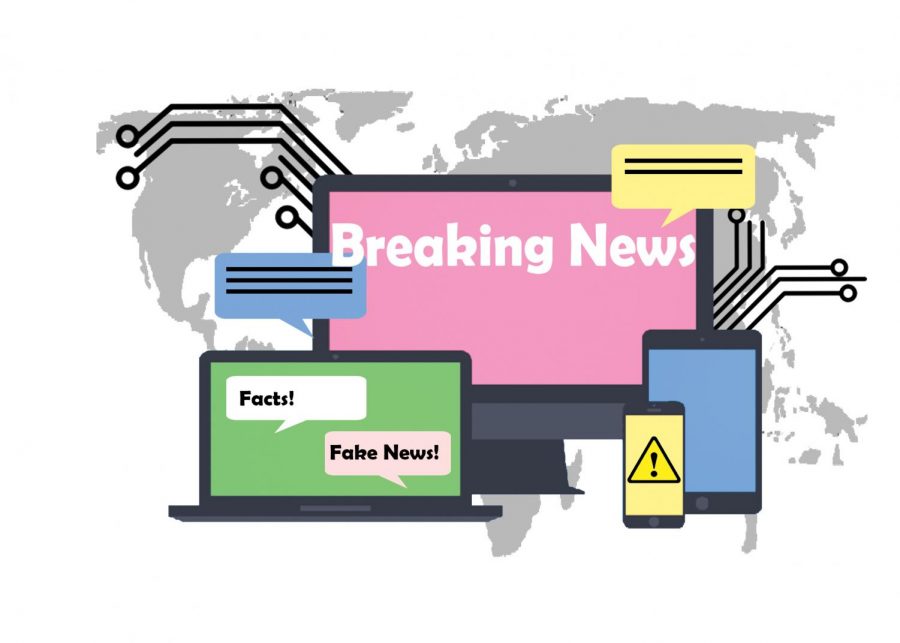 Over the summer there was an explosion of information across social media regarding the Black Lives Matter (BLM) movement and the response from the government. As a journalist I was ecstatic to see people sharing their knowledge with one another and becoming more and more informed about the world around them. But as I looked further into some of the posts I would, I noticed that there were discrepancies between the post and the concrete facts. What was aggravating to see was seeing groups of people supporting the post despite the evidence against it. It made me realize that not everyone would fact check these claims before standing by them.

We exist in The Age of Information. We have constant access to every event that is happening in the world and each other at any given moment. Never before have we been so interconnected and informed yet simultaneously distant and unknowledgeable. It would be expected that a generation that has been partially raised and/or have grown accustomed to the internet and smartphones to be able to sort the facts from fiction.

“In the age of information, ignorance is a choice.” – Donny Miller

Ignorance is defined as the lack of knowledge, but often has the connotation of deliberately choosing to disregard the facts. Being ignorant about a subject is no longer an excuse. You have the ability to learn new information and to become informed of that topic at any time, any place. It doesn’t matter if you were never taught a particular topic in all of your years of schooling. It is our responsibility to educate ourselves and to learn how to sort what is given to us.
The Role of Social Media:
“As our circle of knowledge expands, so does the circumference of darkness surrounding it.” – Albert Einstein

The problem with an abundance of information is the abundance of misinformation that comes with it. While the spread of false news and propaganda is not a new idea, the popularization of social networking platforms have increased the prevalence of false news stories and the speed at which they become viral. In recent years, there has been an increased concern about the circulation of misinformation on social media platforms and how its influence.

In a 2017 report from the Pew Research center, 32% of U.S. adults say they often see made-up political news online. A separate paper published in 2018 on Science found that political stories that were false had a broader and faster diffusion than those that were true.

In the 2015 publicly available voter files in ten U.S. states shows that individuals 65 and older were about five times more likely to share false news stories than those between 18 and 25 years old. Those who are registered Republican users were three times more likely to spread misinformation than Democrats, but that could have also been due to the higher rate of anti-Clinton campaigns during this time.

According to a study published on the Stanford Institute for Economic Policy Research (SIEPR) about the trends in the diffusion of misinformation on social media, user interactions with false content became more prevalent on domains such as Facebook and Twitter during the 2016 election. Since then the amount of user interaction with “fake news” on Facebook has decreased but continues to rise on Twitter.

This is evident on other social platforms as well. In a study conducted by University of Florida College of Journalism and Communications alumnus about misinformation on Instagram, it was found that there were two key factors that contributed to the spread: judging credibility based on the reputation of the endorser and the amount of positive feedback the post received. Celebrities were seen as more credible to participants and were more likely to support whatever message they were endorsing, even if the information was incorrect.
The Involvement of Corporations:
These days the role of corporations rivals that of our governments. They influence our economy, our society and can influence our information. News companies have an agenda and release facts and statistics about events that support their narrative. It can be accurate data, but the problem is that it displays only one side of the story instead of the full picture. A large portion of news networks like Fox News, CNN, AOL News, etc. are owned by companies and spread one side of the narrative and cater to those who share their beliefs.

Since the onset of COVID-19, there has been a surge in fake news exploiting the public’s fear and uncertainty surrounding the virus. Pro-government media outlets broadcast conspiracy-themed content

FOX News had been sued by an organization called the Washington League for increased Transparency and Ethics (WASHLITE) for spreading false and misleading information regarding COVID-19. They argued that FOX News, FOX Business and other cable companies should be held responsible for “interfering with reasonable and necessary measures to contain the virus by publishing further false and deceptive content.” In this example, FOX warped the perception of the virus to fit their narrative instead of giving the proper statistics.

Many major news networks fall left or right of the political bias spectrum. While there is no one clear method to measure the partisan bias of news sources, a report based on a 2014 survey shows the political standing of a network’s audience rather than the source. It was found that Huffington Post and Mother Jones were on the far left side of the spectrum while the Washington Post and New York Times leaned towards the left and that The Blaze/GLenn Beck Program and the Drudge Report were on the far right while FOX News leaned towards the right.

The world runs on money and these corporations will support whichever narrative to earn the most money and to keep the public ignorant. What is concerning is the narrowing of choices in media networks as they get consumed by larger and larger companies. There are five corporations that own the majority of the media we see: Time Warner, Disney, Murdoch’s News Corporation, Bertelsmann of Germany, and Viacom. This allows for less and less diversity in narrative.

These studies and findings go to show that the claims you see on social media, news networks and from your friends are not always concrete and you should research them on your own time. We have all the information of the world at our very fingertips. It is our duty to separate fact from fiction and to become informed because ignorance is no longer an option.