Students experience changes as phase one of renovations progresses 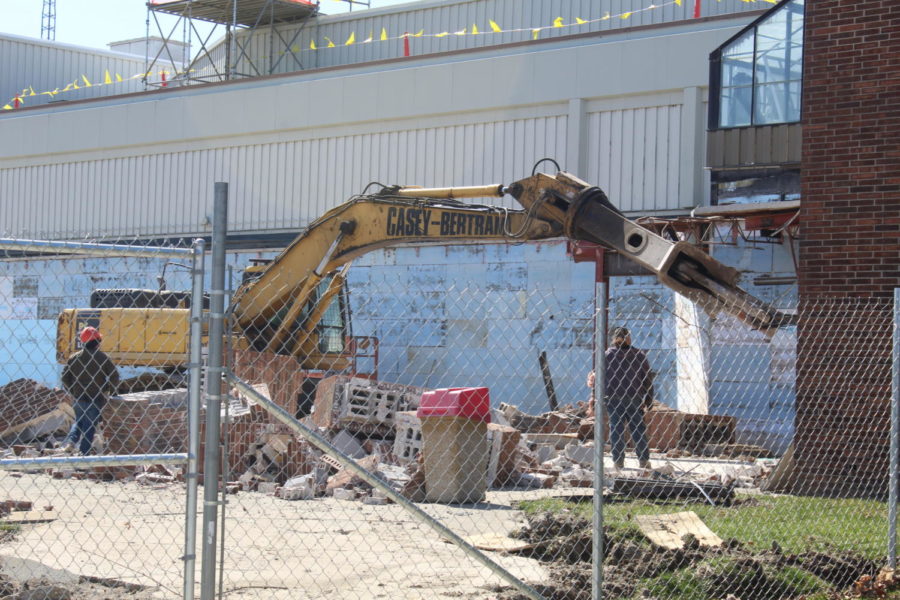 Lawrence North has been undergoing significant changes while under construction this past school year. The demolition can be seen where the front of the building used to be, with cranes and trucks and piles of branches and rubble, and inside the building in the art and journalism hallways. The remodeling has come with its fair
share of hurdles and obstacles.

“Our heating and cooling system has been off kilter for a while now. So, I basically ask that be turned off, so now everybody’s cold,” said Bush. “We’ve had an overly abundant amount of leaks in our roof in various locations, especially the auditorium. We’ve had a couple of power surges here, as of late. With those issues, it’s been great working with the construction team, they try to jump on it and take care of it as soon as possible.”

A blueprint and timeline can be found hanging on the windows of the cafeteria. Those who are interested in keeping up with the progress can see where LN is in the process.

“There are different timelines for different phases,” Bush said. “We had Phase 1A at the back end of the school, where Mr. Holmes’ and Mrs. Hostetler’s classes used to be. That’s where journalism and newspaper used to be. That’s all
supposed to be done at the end of June. They’re going to shut down the whole other side of the south end of the building, and get that ready for our art and music teachers. So, there’s just different timelines, and that’s why I posted the maps up on the wall for everyone to see.”

As the school changes from two days a week in person to four days a week, the amount of students on campus has doubled. In the midst of it all, the student parking lot has begun to be remodeled. The student entrance has been relocated from door 11 to door 14, where students now park and enter the building.

“The hardest thing is probably not initially knowing where door 14 was,” said sophomore Trace Cole. “I had trouble
finding that door because I’ve never heard of it before. Also, the stop sign to go in is annoying.”

Navigating this change has proven difficult for some students. Bush believes that the traffic flow will look different for
a while, but that students will eventually adapt.

“We have a new pavilion going out by the tennis courts, so that makes our parking lot skinnier. April 5, we had a lot of new students coming back, and a lot of them drive, and we’re going to take a lot of your parking away from you. So, you know, that might be a challenge,” Bush said.

New spaces, classrooms, and furniture are all expected to be included in the remodeling. Bush believes that these accommodations will enhance the learning environment of the school while simultaneously providing a space that is all around more modern.

“One thing you’ll have that I’m excited for is connectivity. We can bring in different means of technology that our current building won’t support. More student collaborative spaces where they can work on projects together, classrooms can be converted into meeting rooms, we’ll actually have a senior cafeteria. Even the media center will look
different,” Bush said.

The construction is set to be done by November 2023. Until then, frequent changes to the building are to be expected. Though a tedious process, the final product is set to be well worth the wait.