LN basketball team falls short in state game against Carmel, but still reflects on their accomplishments as they finish 28-3 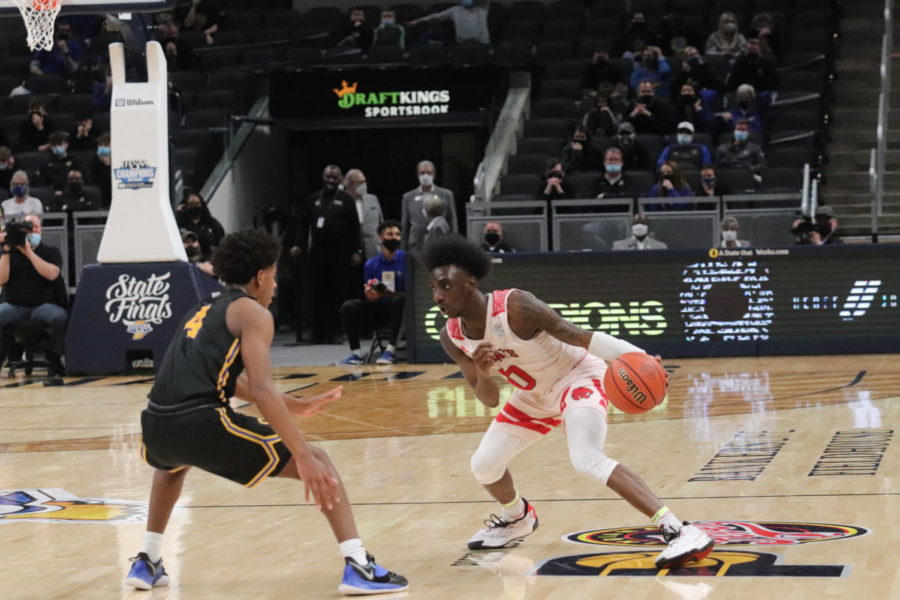 Seconds remained in the game and Bloomington South missed a three pointer. The Wildcat fans erupted as the last few seconds ticked by. The buzzer sounded, and the Wildcats had won the semi-state championship 54-52, punching their
ticket to the state finals.

“It felt like a dream come true,” Senior DJ Hughes said. “Going to state has always been something I’ve wanted ever since I was a little kid.”

Two weeks later, the results were different. The team faced Carmel High School in the IHSAA State Championship finals and fell short, losing in overtime 51-46. They were within 3 points with 17.6 seconds left in the game, 49-46, but missed free throws hurt their chances at winning.

Despite the result, Hughes is proud of the team as they ended their season 28-3.

“During the game I was just focused on trying to win. By the end, I felt heartbroken, but I’m still proud of my team, regardless of the outcome of the game,” Hughes said.

The team had a successful year. They were Marion County Champions and won sectionals, regionals, and semistate in order to make it to the state finals. While they did not win the state championship, Head Coach Jack Keefer felt that his team had the skills needed to be state champions.

“It was a great year. We didn’t win the state, but the journey and the ability to win the state was all there. We just, on that particular night, got beat,” Keefer said.

Keefer appreciates all the support the team got this season, especially in light of all the changes due to COVID-19. He believes that the community helped encourage the team and help them to have a successful season.

“I thought the community was great the way they joined us during a tough time. My wife is an instigator and she got the community to come in and decorate the building for us, and she made meals for the guys each week before each game. It was quite an effort of the community itself in getting behind this team. We just had a good time and a good run,” Keefer said.

With the COVID-19 pandemic, many events and everyday activities have looked different this year, so Keefer was happy to be able to have as exciting a season as they did.

“It was just a wonderful experience for the kids. There wasn’t much going on in school that was very exciting, and those kids brought excitement to the school year during kind of a boring time. They brought something to the table,” Keefer said.

For some, the state championship game was the last of their high school career. Hughes will be continuing his career at Butler University and senior Shamar Avance has been offered a scholarship to play for Wabash College next year.

“These guys, all of them, did a very good job of mastering the skills that they are doing and people want them to play for them in the future here,” Keefer said.

Although the team has five graduating seniors this year, Keefer is confident that the program will continue to be successful for years to come.

“Next year we have to rebuild a little bit. [Junior Omar] Cooper did not play all year and he’ll be back, and [junior CJ] Gunn’s back. [Junior Macoyion] Brown, a young man that moved in at the beginning of the year, is back. Those three will start us, and then we had a successful group in the JV, and then we had a very good freshmen team and undefeated 7th and 8th grade teams. The cupboards are not bare, it’s just got to get some experience,” Keefer said.

Gunn is looking forward to leading the team next year. He hopes to make it back to the state championship and lead his team to victory.

“Looking forward to having a bigger role with being a senior leader, and leading this team to another state and getting the blue ring instead of red,” Gunn said.

Keefer believes the team’s success was reflected in everything they were able to accomplish this year. It was their accomplishments that made this season so exciting.