The fight against e-cigarettes 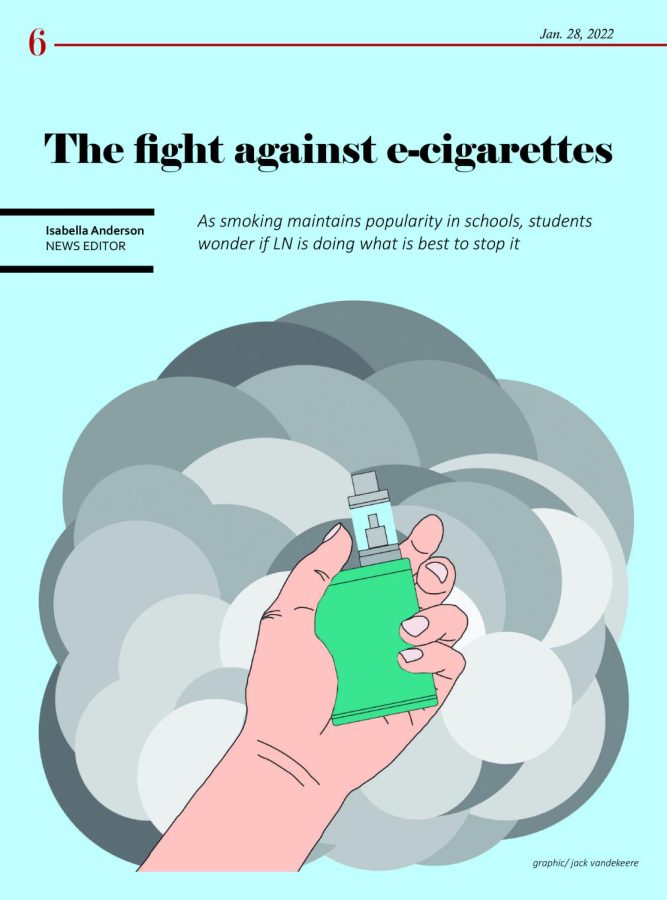 As smoking maintains popularity in schools, students wonder if LN is doing what is best to stop it
Junior Jasmine Asumang enters the restroom and immediately smoke and the smell of artificial mango hits her as she enters. She washes her hands and fixes her hair before glancing at the hotline number on the wall and walking out.
“I don’t vape, but when I go to the bathroom it really makes me feel uncomfortable,” Asumang said. “I just don’t like the idea of nicotine. I know that nicotine is in this [vapes] and it just makes me really uncomfortable being around that kind of stuff.”
The week students arrived back to school after Winter Break, Principal Brett Crousore installed a new incentive that aims to help students stop vaping: a hotline, which allows students to alert authorities of smoking in the restrooms.
“It’s trying to put a stop to some of the behavior that happens in unsupervised areas and allows kids to have a voice. I believe so strongly in the student voice,” Crousore said. “I’m the principal. I need to be the leader, and I want kids to feel like they have direct access to me.”
The number goes straight to Crousore and is confidential. The administration can then check the cameras outside the res

trooms to see who was leaving when he got the report.
“I wouldn’t know who the student is unless I followed up on the number with them. If I felt like somebody put something inappropriate on here to me, I’m going to follow up. But for now it’s only for a read only and you’re sending it out for me to read, to inform me. If I choose not to do anything then shame on me,” Crousore said.
Reports can be made at any time. The hotline aims to make it easier for students to talk to Crousore, and texts can be sent at any time, even hours after the incident occurs. In just one week, there were three reports sent.
“There are hundreds of kids that feel very comfortable walking up to me in the hallway and saying something to me or coming to my office and saying something to me, but not all of them,” Crousore said. “We serve 2900 students. I need to be able to differentiate the way students can communicate with me. Good for them, I’m glad they started to communicate with me.”
While the hotline is slowly combating the issue of vaping in schools, many believe the hotline is not enough, or the best way.
“I don’t think it’s really effective because first of all our generation is very much about ‘no snitching’. I feel like they should not rely on us as much to catch people vaping,” Asumang said.
Students can also be reluctant to send in alerts and are looking for a better way to catch students in the bathrooms.
“They know that people are vaping, so when it happens they should maybe check in the bathroom every once in a while to see. If they catch them, then that’s when they’ll do something about it, but we don’t know what’s happening to them if we send it to the hotline,” Asumang said.
The restroom is not the only place smoking is happening. Some see it in the hallways when no adults are around.
“Today I was walking in the hall towards door 15 at dismissal and someone was just freely vaping in the main hallway. Nobody saw, there were no security guards, no teachers, just the students in the hallways. We couldn’t do anything because it was really brief,” Asumang said.
Vaping also happens off school property. Even though the schools cannot take direct action against users that do not engage on school grounds, they can make an effort to educate them.
“I don’t know if it’s the best way, just because I don’t feel like a lot of people will actually call into the hotline,” junior Marah Kolner said. “We could probably do a little more. I don’t know what exactly, but a lot of it doesn’t just happen at school.”
Many students believe that different measures should be made to prevent vaping in schools. They believe topics like vape education should be widely spread to educate people on the consequences of vaping before it even begins.
“I think we don’t have it and we need it. We need that type of stuff so that we know at least, and they know that we know, the health disadvantages of vaping,” Asumang said.
Many see vape education as a positive option because it does not automatically get students into trouble. Instead, it takes the time to communicate with the students the pros and cons of what they’re doing.
“There’s that thing, if people tell you not to do something, you want to do it more. I feel like the idea of getting in trouble just kind of adds to that,” Kolner said.
Crousore believes that talking to students is the most important part about educating students on smoking and getting them to stop. While he installed a hotline in the restrooms, he also hosted a talk with parents about how to get their students to stay off drugs on Jan. 26.
“I’m not going to be the one to hand you back your pen, and a lot of kids feel like that’s the biggest discipline,” Crousore said. “I want the conversation. I’m not a big suspension expulsion person, that’s not me. I want to talk to you about stopping and you may choose to listen to me or you may choose not to.”